David's Notes: 2015 was the 30th Anniversary of PRS Guitars and to help celebrate this milestone they released a limited run of instruments inspired by their Tree of Life guitars. The centerpiece art was to be a twisting vine inlayed among their 30th Anniversary bird pattern , running up the length of the fretboard and on to the head stock. This particular guitar is a Custom 22, which according to the PRS website,  "is one of our workhorse models with all the tones you’ve come to expect from a PRS with a distinctive, warm midrange and clarity ."  For the Vine Custom 22's, PRS chose their 57/08 pickups (my favorite PRS pickup) wired for the 5-way blade switch, which offers multiple pickup combinations, including both dual humbucker and dual single coil options. The Custom 22, named so because of its 22 fret neck, also features a PRS patented trem bridge, which is one of the best in the biz. The bookended, two piece flame maple top on this guitar is likely the best I've seen to date, with a tight flame pattern that closely matches the quarter sawn flame maple neck. What really places this top among the best is the vertical grain pattern overlaying the horizontal flame. Combine the patterns with the Makena Blue stain color and it brings to this viewer's mind crossing wave patterns in a pool of water. Finally, the contrast with the Gaboon Ebony fretboard brings the package together and makes the color seem to pop off the instrument. It's incredibly impressive, especially in person. One of only fifty Vine Custom 22's made worldwide, I was very honored to be able to view and handle a number of the Vine instruments and hand select the one Custom 22 that I felt was the best. This guitar is the best looking of all the Vines I've seen, by quite a margin, and I'm very pleased to be able to make it available for one lucky future owner, but only for a limited time! It's one of my favorite guitars and I'm not keen on selling it, so act fast!

Update 9.17.2016: We had this guitar hand signed on the back plate by Mr. Paul Reed Smith himself! 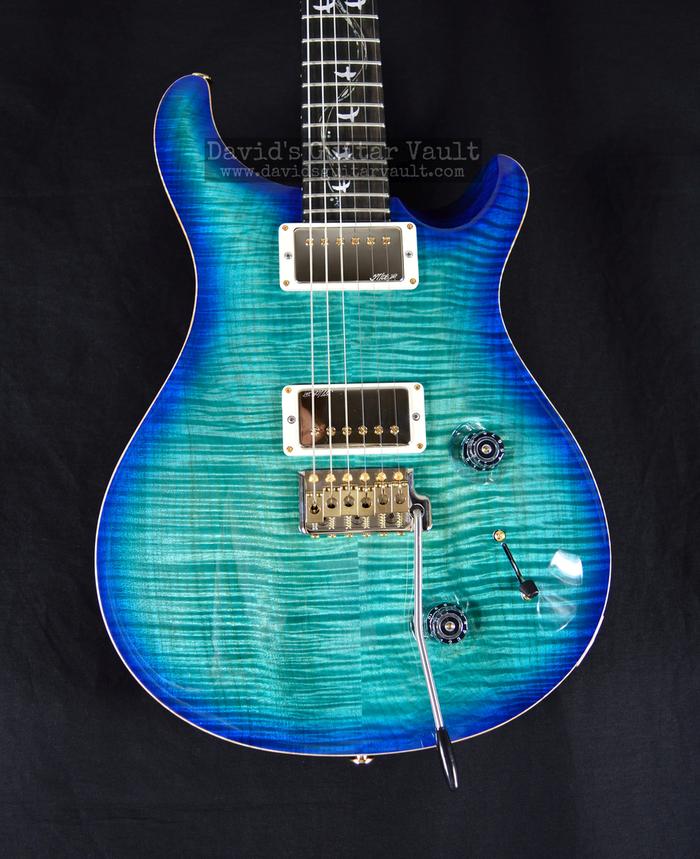 This guitar has been sold! 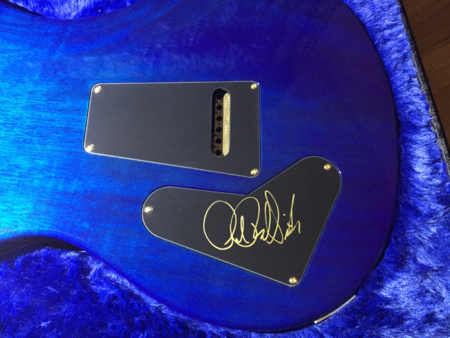 ​With this guitar, serial # 15 222279, we present to you one of the finest examples of the Vine series in mint, never played condition, just as it arrived from the PRS factory, hand signed on the back plate by Mr. Paul Reed Smith himself! It is a Custom 22 model in Makena Blue and offers a wide variety of tones. ​Again, from the Inside PRS archive:

Inspired in part by our Tree of Life inlay designs, the 30th Anniversary Vine is an elegant inlay made from Mother of Pearl, Paua, and Paua Heart. This special inlay is being offered on two models: the Custom 22 and newly reintroduced McCarty. The Custom 22 is a classic guitar with distinctive midrange and clarity. Loaded with 57/08 treble and bass pickups paired with a 5-way blade switch (which offers a dual humbucking option), the Custom 22 offers exceptional tone and versatility.