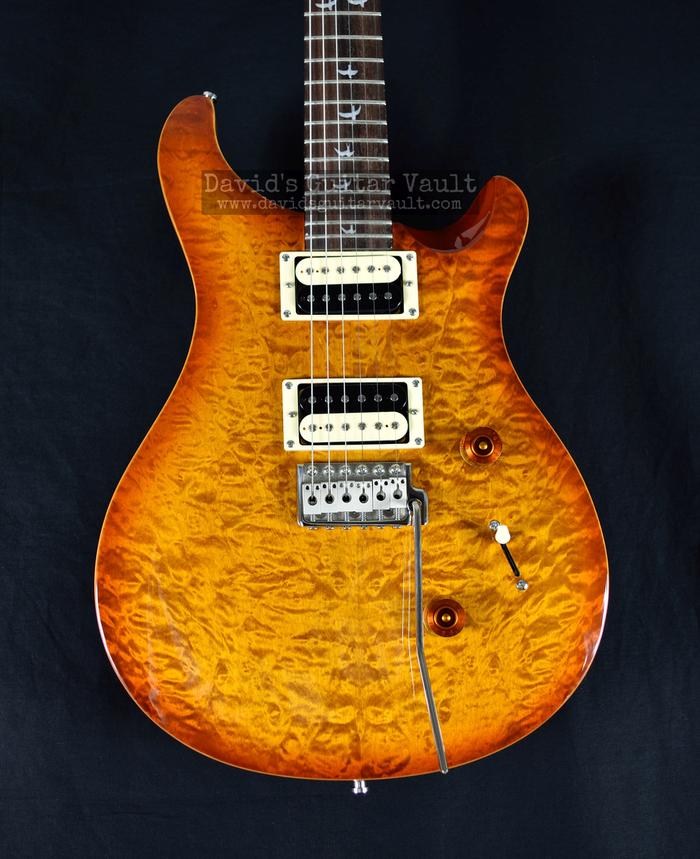 Paul really had a ball with this 30th Anniversary and his masterpieces weren't limited to just his U.S. made instruments. For more information on his Anniversary Edition SE Custom 24 model, I once again turn to the PRS website.

​David's Notes: 2015 was the 30th Anniversary of PRS Guitars and to help celebrate this milestone they released a limited run of instruments with a unique bird inlay pattern and a push-pull coil tapping tone knob. As a budding player, my first quality guitar was a PRS SE (Student Edition) Standard 22. I credit that instrument with keeping me interested in playing over the years. I won't name my very first guitar, but the quality was such that it made me dislike playing and therefore learning. Every note buzzed and I was convinced that a) it was my fault and b) I was apparently too old and uncoordinated to learn. Purchasing the PRS SE Standard changed all of that. This 30th Anniversary SE Custom 24 is an amazingly playable and enjoyable instrument for the money. This is a guitar fully capable of gigging on a daily basis for those road warriors among us. The choice of woods combined with the Hot, Fat, Screams (HFS) bridge pickup  and Vintage Bass (VB) neck pickup give it all the tone and character one could possibly want for dirty blues all the way through heavy metal. You can even reach down into the Stratocaster, single coil tones with the coil tapping feature. For PRS SE Custom guitars, there is a misnomer out there that they only have thin, veneer maple tops over solid mahogany bodies, but this isn't true. There is a full 1/4 inch thick maple top over the mahogany body, over which is a figured maple vaneer for looks. What the SE's do lack v.s. the full U.S. spec. instruments is a carved top, which is very labor intensive, and the U.S. spec. electronics. That said, the SE models are outstanding values. I love the Vintage Sunburst color on this one, which carries on to the headstock as well. And the zebra pickups just add to it. This is one classy looking screamer of a guitar! Parents, if you're looking for an affordable guitar that will cause your child to love playing, this is it!

This guitar has found a new home with David M. Congratulations Sir!

​​Updated for our 30th Anniversary, the 30th Anniversary SE Custom 24 is the pinnacle of value in the realm of budget-friendly workhorse guitars. With a wide variety of tones, addictive playability, and road-worthy durability, professional players and aspiring players alike will feel right at home with this classic instrument in their hands.

Played by internationally touring artists, gigging musicians, and aspiring players, the SE Custom 24 has become the most popular SE model in a diverse lineup of guitars. With its own version of PRS 30th Anniversary inlays and a quilted or flame maple veneer, the SE 30th Anniversary Custom 24 brings a unique look to a classic instrument. The SE line was established in 2001 with the goal of providing players with high-quality, reliable instruments. Featuring HFS treble and Vintage bass pickups, volume and a push/pull tone control with a 3-way blade pickup selector, this guitar offers a versatile array of PRS tones from a classic era. The addition of PRS’s patented tremolo design and a wide thin maple neck give the SE 30th Anniversary Custom 24 addictive playability.

​With this guitar, serial # O20586, we present to you one amazing instrument for the money in like new condition. It is a SE Custom 24 model in Vintage Sunburst and offers superb playability, tone, and quality for the price point. It is our sincere opinion that you can find no better guitar for the money that this.