Paul really had a ball with this 30th Anniversary and his masterpieces weren't limited to just his U.S. made instruments. For more information on his Student Edition SE Floyd model, I once again turn to the PRS website.

​The SE 30th Anniversary “Floyd” Custom celebrates many things: 30 years of PRS, the growth that has allowed PRS to deliver quality instruments to players at the most affordable levels, and the guitar that started it all with the edgy update of a Floyd Rose 1000 Series tremolo (this tremolo is made to the design and with the same high-quality materials as the “Original”). Also featuring the 30th Anniversary commemorative inlay package, quilt maple veneer, SE HFS and SE Vintage Bass pickups, and a push/pull tone control for coil-tapping with 3-way blade switch, the 30th Anniversary “Floyd” Custom allows you to dig in, rock out, and dive away in style.

Since the SE project began in 2001, the goal has been to provide quality instruments that you don’t have to fight to play and that you won’t grow out of. Now, the SE line of electrics, acoustics, and basses is played by beginners, gigging players, and touring artists all over the world.

This instrument has sold.​

If you have any questions please contact us directly at sales@davidsguitarvault.com

​David's Notes: 2015 was the 30th Anniversary of PRS Guitars and to help celebrate this milestone they released a limited run of instruments with a unique bird inlays. As a budding player, my first quality guitar was a PRS SE Standard 22. I credit this instrument with keeping me interested in playing over the years. I won't name my very first guitar, but the quality was such that it made me dislike playing and therefore learning. Every note buzzed and I was convinced that a) it was my fault and b) I was apparently too old and uncoordinated to learn. Purchasing the PRS SE (Student Edition) changed all of that. This 30th Anniversary Custom 24 Floyd is an amazingly playable and enjoyable instrument for the money. This is a guitar fully capable of gigging on a daily basis for those road warriors among us. The choice of woods combined with the Hot, Fat, Screams (HFS) bridge pickup and Vintage Bass (VB) neck pickup give it all the tone and character one could possibly want for dirty blues all the way through heavy metal. It can even reach down into the Stratocaster, sparkly single coil tones with the coil tapping, while being able to dive bomb with a vengeance! The authentic 1000 series Floyd Rose tremolo bridge with the locking nut means it stays in tune practically for an entire play session or gig. Oh, and did I mention how much I love the Trampas Green color? It is quickly becoming one of my favorites, especially paired with the natural finished mahogany back and maple neck of this guitar. For PRS SE Custom guitars, there is a misnomer out there that they only have thin, veneer maple tops over solid mahogany bodies, but this isn't true. There is a full 1/4 inch thick maple top over the mahogany body for all the tonal properties those two woods together offer. Over this maple cap is a figured maple vaneer for looks. What the SE's do lack v.s. PRS Core instruments is the labor intensive carved top and U.S. electronics. This guitar would make the perfect gift for the budding guitarist in your family or the musician who needs a quality road workhorse. 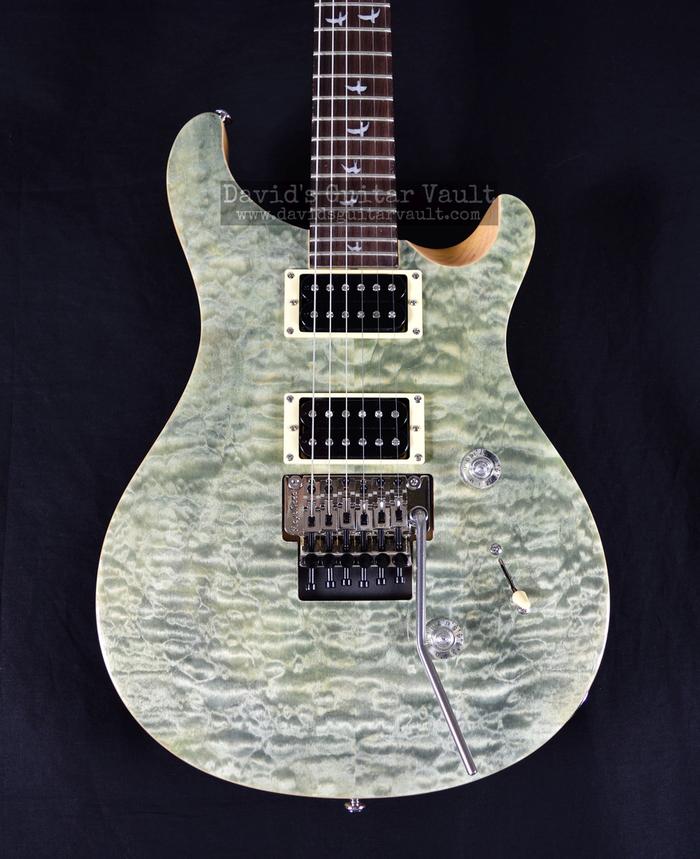