Learn more about the Private Stock DGT Birds of a Feather Semi-HollowType your paragraph here.

If you have any questions please contact us at sales@davidsguitarvault.com.

Many PRS fans consider the new McCarty 594, and subsequent Singlecut 594, to be the Les Paul slayers of the PRS arsenal. However, I say the DGT is the real Les Paul slayer, at least from a tonal perspective. While the 594s may be closer to a Les Paul  in design and features, the Dave Grissom PAF pickups are specifically voiced to his needs, and in my opinion come the closest to the tones produced by the famous '59 and '60 Gibson PAFs. These DGT pickups really need to get some more exposure. Until they do they will continue to be under rated, or even unheard of, by many guitar enthusiasts. They blend exceptionally well with this semi-hollow "Birds of a Feather" guitar.

​     As for looks, what can I possibly tell that your eyes haven't already? This guitar is simply stunning! The semi-hollow body is constructed of a solid Ziricote top with African Ribbon Mahogany utilized for the middle and back, along with beautifully matched back plates cut from the same piece of wood. The Ziricote top is tastefully bound in Curly Maple, which effectively pulls the whole package together nicely. But the real piece of art is the "Birds of a Feather" inlay on the neck, celebrating artistry and nature. I've never seen a more stunning guitar neck than this one. The entire ensemble is topped with an amazing Private Stock Eagle swathed in the "April" mother of Pearl banner inlayed, again in Ziricote and Curly Maple, on the headstock. Simply stunning!

Thank you for contacting us! If needed, you will hear back within 48-72 hours.

​​The DGT neck shape is based on two of Grissom’s (former) favorite PRS guitars and comes in between a Pa ern/Wide Fat and a Pattern Regular/Regular. The larger frets and 11-gauge strings, combined with other appointments (thicker back, 22-fret neck, etc.), give the DGT a beefy tone. The pickups were finalized after a year of A/B-ing more than forty variations. The resulting tone has ample depth without losing any openness. The control layout features two volume controls and a push/ pull coil-split, providing tons of versatility and control. Full specifications below.

The Story: Private Stock Guitar of The Month

​With this guitar, serial # 16 227171, we present one amazing guitar in new, never played condition, just as it arrived from the PRS factory! It is a DGT model, crafted from solid Ziricote and African Ribbon Mahogany and inlayed with "Birds of a Feather" mosaics crafted from Ziricote and Curly Maple. The headstock mosaic includes a "April" banner engraved in mother of pearl. ​Again, from the Inside PRS archive: 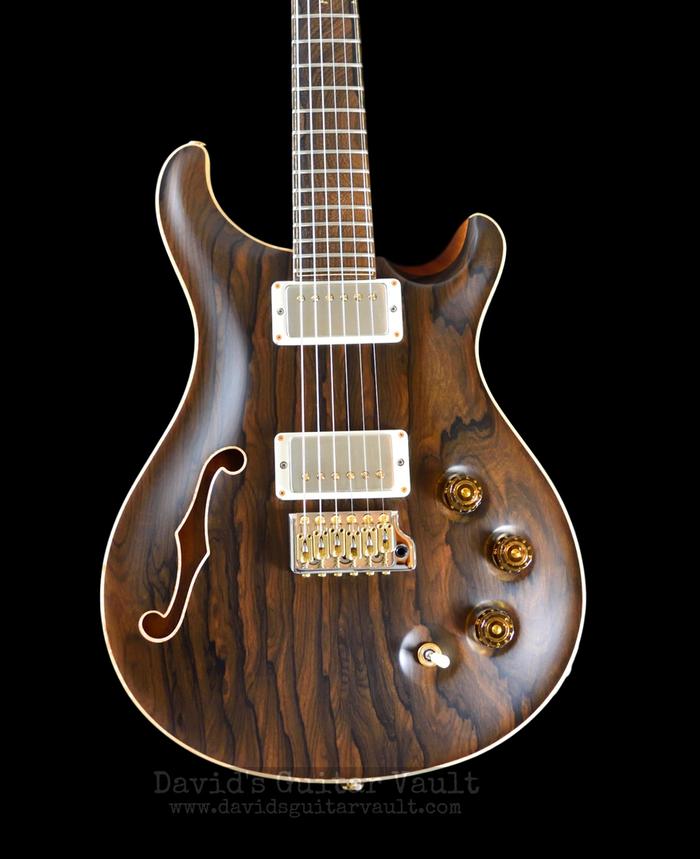 There are few guitars like those that roll out of the Paul Reed Smith Private Stock department, and this one is fairly unique even among guitars of such distinguished pedigree. I'll let them describe this incredible guitar and the program that created it.

​PRS Guitars Private Stock team is celebrating their 20th Anniversary this year with the return to the program that started it all: Guitars of the Month.

The original Guitars of the Month were cased between December 1994 and March 1996. They provided the opportunity to experiment with new ideas and led directly to the Private Stock to the creation of the Private Stock program with the first “official” Private Stock instrument casing on April 19, 1996.

“At the time, the original Guitars of the Month program was a way for us to experiment with new designs and features. To this day, that innovation and specialization is still at the heart of the Private Stock program, and we are very excited to try out some new ideas for our 20th Anniversary year.” – Paul Reed Smith

Each month in 2016, the Private Stock team will deliver a unique design in limited numbers, highlighting the detailed craftsmanship and exquisite materials that define Private Stock.

​A Classic Model in a Show-stopping Package

​The DGT (David Grissom Trem) is a vintage-appointed guitar that is all about the details. Based on the original McCarty model, the DGT adds a signature neck shape, taller frets (and larger gauge strings), custom-spec’d pickups, and a unique control configuration. Take those distinctive features and bring it to Private Stock’s Guitar of the Month program, and all the details add up to be a show-stopping take on a very iconic PRS model. Only twenty of these instruments will be made for April 2016, commemorating Private Stock’s 20th Anniversary.