There are few guitars like those that roll out of the Paul Reed Smith Private Stock department, and this one is fairly unique even among guitars of such distinguished pedigree. I'll let them describe this incredible guitar.

The Story: Private Stock Guitar of The Month

​David's Notes: This is "Sunshine", as named by my wife, who names everything (with the possible exception of her socks). In our circle of friends the name has stuck, but we'll leave it up to the purchaser to adjust as desired. A unique identifier such as a name is very fitting for this, the most unique of all PRS guitars. It is built and voiced like no other from the company's catalog. The McCarty 594, so called because of its vintage inspired scale length, has earned the respect of industry giant John Mayer, who will be using it "all over" his new album. During his now famous Periscope video in which he introduces the world to the instrument, the money quote comes when he hits a bent note combo, then clenches his fist and says, "now, I defy you to show me a new guitar that does that!" ​ Needless to say, this humble player agrees after trying the 594 for himself. It offers the broadest range of vintage tones from one instrument that I've ever witnessed. If I were a better player, one deserving of this guitar, I'd surely keep it for myself. Let my loss be your gain and grab this unique beauty when available, before I have a change of heart! In direct comparisons to both our Gibson Custom Shop "Skinnerburst" 59 reissue Les Paul (with custom Seymour Duncan Bonamassa pickups), and my 2005 Fender 60th Anniversary American Deluxe Strat, "Sunshine" was able to authentically mimic the tonal qualities of both instruments, while offering equal or greater playability. It stays perfectly in tune through long play sessions thanks to the solid bridge design and real bone nut and, as with all PRS, the neck and frets are perfect the entire length. Every single component of this guitar exudes quality and loving craftsmanship. I couldn't be more pleased and would like to reiterate that this is truly a PRS like no other. I sincerely hope Paul one day utilizes the 58/15LT pickups as well as the Pattern Vintage neck in a core line model such as the SC245.

​PRS Guitars Private Stock team is celebrating their 20th Anniversary this year with the return to the program that started it all: Guitars of the Month. Each month in 2016, the Private Stock team will deliver a unique design in limited numbers, highlighting the detailed craftsmanship and exquisite materials that define Private Stock.

February’s Guitar of the Month is the McCarty 594. Named after Paul’s mentor, Ted McCarty, the McCarty 594 pays homage to vintage “Golden Era” instruments while incorporating modern build techniques for an instrument that is at once incredibly familiar and effortlessly playable.

There are several details that PRS has incorporated into the 594’s design that contribute to the guitar’s tone and feel, including:

Twenty six of these instruments will be made for February 2016, commemorating Private Stock’s 20th Anniversary.

“The 594 is the best new guitar I've played in years. It has a vintage heart and soul but without the technical limitations that usually come along with an old instrument. What good is an old guitar if you can't get all that feel out of the upper frets, or the intonation is off? To hear that old PAF sound but be able to articulate the notes in a way that only modern manufacturing could allow is so exciting. This one's going all over my new record, because it sits so nicely between all of the sonic identities we all know and love. And it plays like a dream.” – John Mayer

The original Guitars of the Month were cased between December 1994 and March 1996. They provided the opportunity to experiment with new ideas and led directly to the Private Stock to the creation of the Private Stock program with the first “official” Private Stock instrument casing on April 19, 1996.

“At the time, the original Guitars of the Month program was a way for us to experiment with new designs and features. To this day, that innovation and specialization is still at the heart of the Private Stock program, and we are very excited to try out some new ideas for our 20th Anniversary year.” – Paul Reed Smith

This guitar has found a new home with Anuchit C. Congratulations Sir! 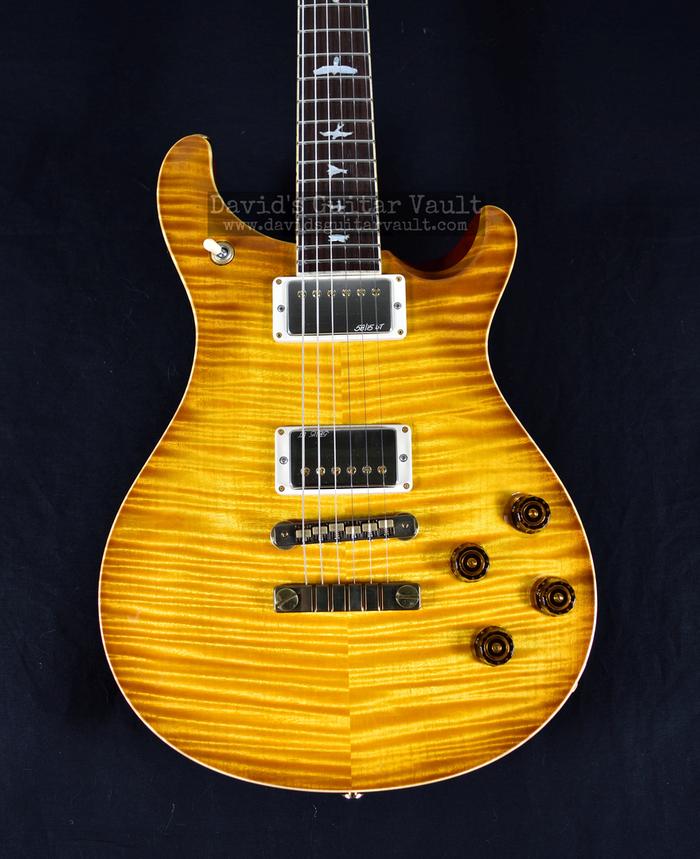 Update: This guitar was so popular it has been added as a core model!

​With this guitar, serial # 16 225779, we present to you "Sunshine", one of only thirteen guitars of this kind made for the United States, and one of only 26 worldwide. This product was so popular it has now been made into a core model, obviously with fewer exotic appointments.  This is the only original, numbered McCarty 594 that we're aware of that is still available for purchase, anywhere!​