For a description of the McCarty 594, we turn to the PRS Guitars website:

Thank you for contacting us! We will get back with you regarding payment processing within 24 hours.

This particular McCarty 594 has an artist grade flamed maple top that's one of the best I've ever seen, reminding me of the old flamed tops on the much lauded '59 and '60 Les Pauls. It also has a solid East Indian Rosewood neck topped by a Brazilian Rosewood fingerboard and headstock veneer. It is one of the most stunning guitars we've ever had the pleasure of having in stock. There is a term for McCarty guitars with rosewood necks... "McRosie". Our belief is that everyone should own at least one McRosie in their lifetime!

​Named after Paul’s mentor, Ted McCarty, the McCarty 594 pays homage to vintage “Golden Era” instruments while incorporating modern build techniques for an instrument that is at once incredibly familiar and effortlessly playable.

There are several details that PRS has incorporated into the 594’s design that contribute to the guitar’s tone and feel, including:

“The 594 is the best new guitar I've played in years. It has a vintage heart and soul but without the technical limitations that usually come along with an old instrument. What good is an old guitar if you can't get all that feel out of the upper frets, or the intonation is off? To hear that old PAF sound but be able to articulate the notes in a way that only modern manufacturing could allow is so exciting. This one's going all over my new record, because it sits so nicely between all of the sonic identities we all know and love. And it plays like a dream.” – John Mayer

​With this guitar, serial #16 235024, we present to you an Artist Package Brazilian McCarty 594 in McCarty Burst. It is in factory mint, new condition. Included will be the factory hard shell case and all factory paperwork.

David's Notes: Crazy-good, artist grade flamed maple top, Brazilian rosewood fingerboard and headstock veneer, and a solid east Indian rosewood neck.... all on the best model in the PRS catalog? All for under half the cost of a Private Stock? What more could one want? Seriously?

This is the best feeling and sounding PRS we've ever had in stock. That's a serious statement if you look over the other PRS guitars we currently have, or have sold over the last year-and-a-half. Did I mention the amazing flamed maple top? One might assume the solid rosewood neck, or the Brazilian fingerboard would be the highlights of this guitar's resume, but in my opinion it's this seriously killer top. Many guitars are said to have "flamed" tops, but this one holds true to the term. Under sunlight or stage lights, the figuring of this top literally bursts out like tongues of flame, moving and dancing as the angle of light changes. Photos can do it no justice!

The new "tweaked" Phase III tuners are a definite improvement in that they keep the feel of the tuners consistent and smooth. The days where some of the tuner knobs become stiff while others get loose over time are finally gone! With regard to the pickups, I can't praise the 58/15LT pickups enough. They are my favorite PRS pickup to date. Somehow they magically far exceed the tonal characteristics of the standard 58/15s upon which they're based. Lastly, the two-piece stop tail is one of the best designs currently on the market. It's very robust and overcomes a lot of the shortcomings of other such bridges.

This guitar is the bee's knees. Someone needs to grab this quick before I decided to keep it for myself!!!

For those unfamiliar with the magic of the 594 model, please allow Bryan Ewald to explain. 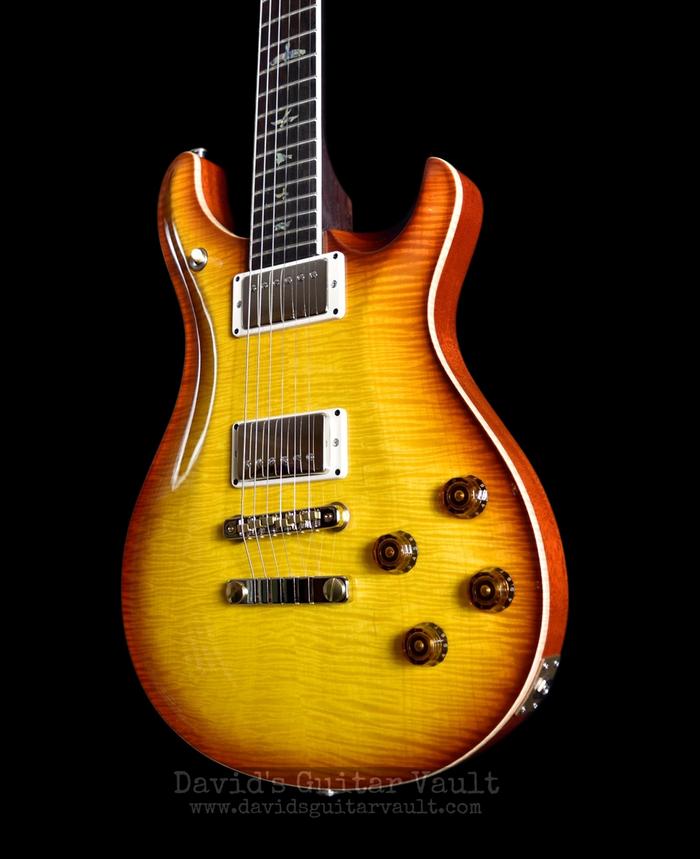 We are offering this amazingly versatile guitar, a PRS Artist Package Brazilian McCarty 594 in the McCarty Burst color with the serial #16 235024, in new condition, for only $5,995. *Our cash discounted price is $5,850!

This guitar cannot be shipped outside of the United States!​