This guitar has been sold.

​With this guitar, serial #18 251800, we present to you one, if the THE, most sought after guitar currently on the market. Place a pre-order today and you can expect to take delivery of your new guitar in January 2019! However, our example is available for shipping immediately!

For a description of the Silver Sky, we turn to the PRS Guitars website:

The Silver Sky - The Great Disruptor? 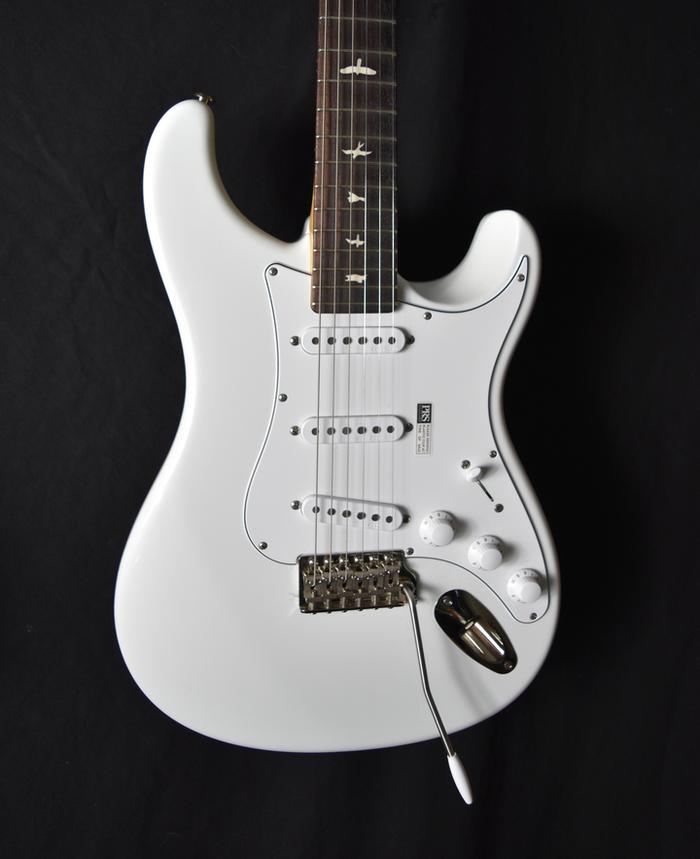 David's Notes:  What's not to love? It's a Stratocaster, and it's a PRS! More importantly, it's a moderately priced Core model from PRS, unlike John's previous Private Stock models that have carried $12,000 and up price tags and were only made in small batches. For the asking price, this instrument is every bit the equal to Fender Custom Shop instruments costing $2,000 more. PRS really nailed the design, build quality, tonal characteristics, feel, and most importantly, price point! Kudos to Paul & Co.

Don't let the 7.25" fretboard radius throw you off. If feels amazing and with PRS's typical industry leading fretwork, higher fret notes don't choke out while being bent, even a full step and a half. Between the fretboard radius and the neck carve, this is one of the most comfortable necks you'll ever grab on a Strat-style instrument. It really is that good! And the reverse headstock, while initially off-putting to some, is done purposefully for both ergonomic and stylistic reasons. Stylistically, the farther protruding lower horn balances out the farther protruding upper horn of the body, while ergonomically the offset design allows more room for the hand while fretting open chords. Meanwhile, the characteristic PRS cutout on the lower horn of the body makes for comfortable access all the way to the 22nd fret for soloing.

The pickups are noticeably hotter than the Fender Fat 50's pickups in the 50's Classic Roasted Custom Shop Strat we compared the Silver Sky to, as well as being brighter and noticeably more articulate. These are some of the most articulate pickups I've ever played that weren't Piezo. Every little brush of your fingers or pick over the string is transmitted through the amp is a very musical way. The bridge pickup position is one of the best on a Strat but most preferred the neck position tone from the Fender. Overall it's a brilliant guitar, especially for the price point!

​​“It’s been a dream of mine for years to design a guitar that includes some of my favorite vintage specifications but with a modern spirit and aesthetic. After two years of study and refinement, the Silver Sky is my vision of what a reboot of the electric guitar should look and feel like.” – John Mayer

The PRS Silver Sky is the result of a close collaboration between Grammy Award-winning musician John Mayer and Paul Reed Smith. More than two and half years in the making, the Silver Sky is a vintage-inspired instrument that is at once familiar but also newly PRS through and through. This model was based off of Mayer and Smith’s favorite elements from 1963 and 1964 vintage instruments, resulting in an idealized version of a vintage single-coil guitar. The attention that was paid to every detail sets this guitar apart.

Some of the more distinctive specifications include, the headstock shape, tuners, neck and fretboard, bridge, and pickups and electronics. The headstock shape is based on PRS’s trademark design, but inverted to both accommodate Mayer’s playing style and also to keep a consistent length of string behind the nut, which makes staying in tune easier. The tuners are a traditional vintage-style, closed-back tuner, but with PRS’s locking design. The neck shape was modeled after 1963/1964 vintage instruments, and the fretboard has a 7.25” radius. The moment your hand grabs this neck, it just feels right. Like the tuners, the steel tremolo takes a classic design and incorporates PRS’s trem arm and Gen III knife-edge screws. The bridge on the Silver Sky is setup flush to the body in the neutral position so that the tremolo bridge only goes down in pitch. By keeping the bridge in contact with the body, the guitar itself is acoustically louder, which improves the signal to noise ratio of the single-coil pickups. The 635JM single-coil pickups are very round and full, with a musical high end that is never “ice-picky” or brash.

Other high-quality specifications include a bone nut, a molded metal jack plate that is curved and makes plugging and unplugging a guitar cable hassle-free, retooled knobs, fretwire that is slightly smaller than what you’d find on most PRS electric guitars, and PRS’s double action truss rod (accessible from the front of the headstock for ease of use).

For those unfamiliar with the new Silver Sky model, please allow Bryan Ewald to explain.