This instrument has been sold.​

​With this guitar, serial #1708425, we present to you the single most sought after and exclusive guitar in our collection. This may be a once-in-a-lifetime opportunity to own one of only forty Madagascar Rosewood 00045-EC instruments made in the world. The other 39 are already locked in the vaults of collectors. If you're a Clapton fan this instrument is an absolute must-have for your collection.

David's Notes: This is our pre-owned C.F. Martin Custom Shop 000-45EC Eric Clapton "Crossroads" edition acoustic guitar in Madagascar rosewood, in factory new condition with original fancy Geib style hard shell case with branded embroidery on the lid and a black shroud inside. The shroud is also branded with Martin, Eric Clapton, and Crossroads Festival embroidery. As with the guitar, both the hard shell case and shroud are in factory new condition. I got the package directly from the vault of another collector who was not a guitar player himself. He purchased the instrument new as an investment and, if he's to be believed, has never allowed it to be played. Based on the fact that neither the guitar or the case shows even the slightest sign of use, I take him at his word. For the duration of its stored life it has been in the original case loaded with a D'Addario Planet Waves two-way Humidipak humidifcation system. This has kept the guitar in an optimal 45% relative humidity environment, within a storage room that was kept at a constant 72 degrees F, since it was new. It doesn't get better than that.

In typical Martin 45 series fashion, this rather unbelievable guitar has green abalone purfling around the entire top as well as around the fingerboard extension, sound hole, all sides, and even the back. Wow! The top is a premium Alpine spruce, offering incredible responsiveness. Under the top is scalloped, 5/16" bracing. The bridge is ebony with a 16" radius compensated bone saddle. The pickguard is abbreviated, Delmar, faux tortoise. The fingerboard is ebony bound in grained ivoroid, inlayed (starting at the first fret) with traditional 45 series .064" select abalone diamond, snowflake, and cat's eye elements. Eric Clapton's signature is inlayed in select mother of pearl across the 20th fret. The nut is 1 3/4" and crafted from bone. The width at the 12th fret is 2 1/8" and the string spacing at the bridge is 2 1/4". The headstock overlay is Madagascar rosewood inlayed with the "C Martin F" vertical style logo in colorful, select mother of pearl.

Overall this is a remarkable and fantastically beautiful pearl and abalone adorned instrument produced with the finest materials and at the highest level of contemporary luthiery. The same Custom Shop employees at C.F. Martin & Co. that make instruments for legends that cost well over six figures, crafted this small batch of guitars to celebrate Eric Clapton's final Crossroads Guitar Festival, held in 2013. Unique to instruments in this limited run is a pair of Crossroads Festival emblems inlayed at either end of the ebony bridge. In all my research I was unable to learn what material these inlays are crafted from, but rest assured they are beautiful. Inside the sound hole is a custom Label of Authenticity listing the instrument's model number, unique serial number, and hand signatures of both Eric Clapton as well as C.F. Martin IV.

Yes, this instrument was personally played, inspected, and then hand signed by Mr. Eric Clapton himself! Read that again before moving on!

We haven't even gotten to the best part yet, which is how the instrument sounds. Sublime is the first word that comes to mind. Among those who regularly get to delve into out vault and test drive our instruments, at least one player has been heard to say "I never knew it could be like this". All of his other guitars had just become mere wall decoration in his mind. I believe he's still traumatized to this very day. The rich, sonic complexity and perfectly intonated chords emanating from this amazing Eric Clapton signature Martin guitar embolden the introverted and invigorate the introspective. It opens new vistas in sonic celerity and unleashes every Clapton student's inner, well... Slow Hand!

I need to just shush now before I talk myself out of selling...

Please peruse the two videos below for further evidence. 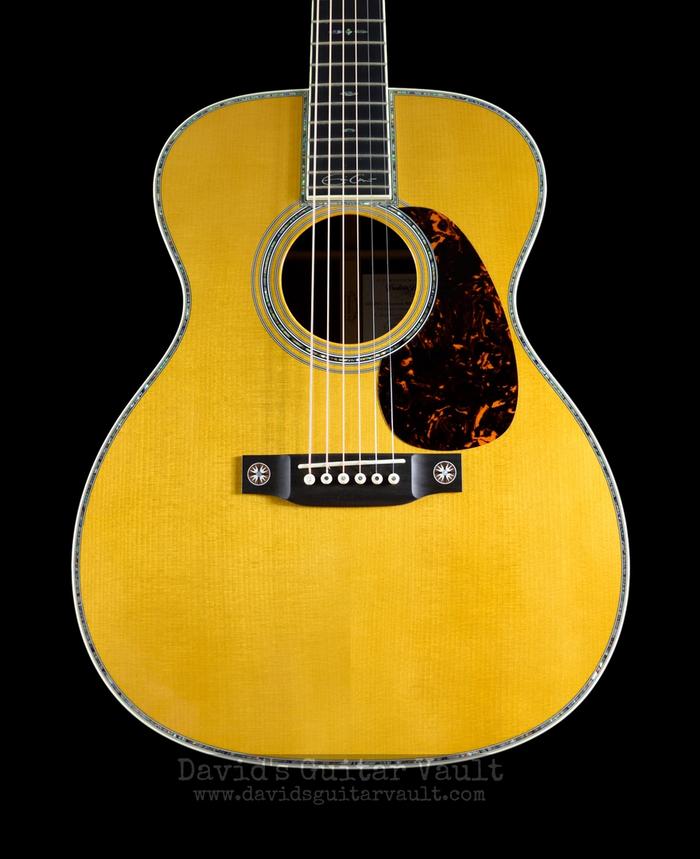